Friends of the Orange Depot

The Friends of the Orange Depot maintain and preserve the Orange Train Depot Museum as an historical venue for the benefit of the community, where residents and visitors can gather to engage with one another and learn more about local history and culture. 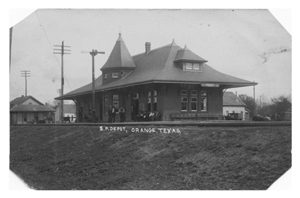 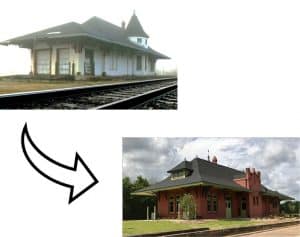 Where We Came From

The Orange Depot, a Victorian-style building erected in 1902, was a bustling and indispensable part of life in Orange up until passenger train traffic through the region diminished in the middle of the 20th century. It has not served its original function since the 1960s; for a while, it was leased as an office space, but has now stood vacant and deteriorating for years. When writer and television producer Carrie Joiner Woliver, a former resident of Orange, passed by the decaying building on a visit in 2012, she was very disturbed at seeing such a vital part of Orange history fall into neglect. Woliver had recently authored the book The Train Stopped in Orange: A Captivating Family History Revealed through 1917 Texas Diaries, based on her grandparents’ lives, in which the railroad and depot had played an important role, and she and her husband Ron decided to take action to save the structure.

They formed the non-profit organization, the Friends of the Orange Depot, in 2013, and by 2018, the board and volunteers had raised the funds to renovate and restore the building.  The grand opening was held for the public, and it now serves as a museum/event center for the residents of the Orange area.

Restored to its former glory, the Depot serves as a museum, educational facility and a Welcome Center for Historic Downtown Orange—a multi-purpose gathering place where locals and visitors can come together to learn about the history and culture of the area—as well as a community space usable by other community or public organizations and individuals for events and conferences. 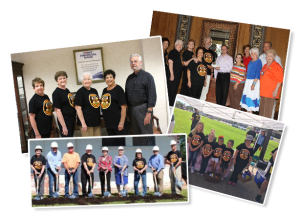 We encourage large and small groups, even school children, to learn about the depot story and Orange history from our volunteer docents.